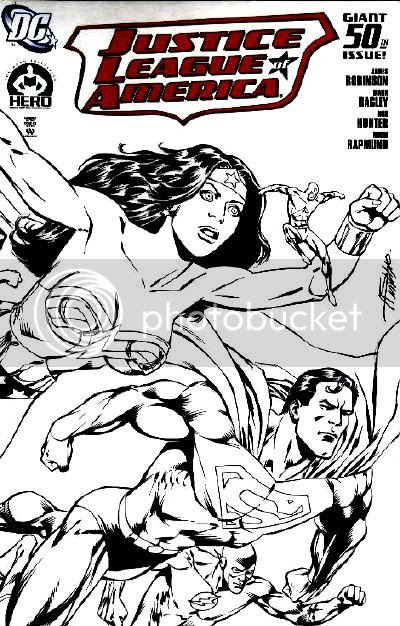 Thanks to his scale, there's really no reason why the Atom couldn't appear on pretty much any of these charity JLA covers. He could literally just be a millimeter square stick figure in the upper left hand corner of any drawing and be kosher. While this deference to the Mighty Mite was still uncommon, there were plenty of inclusions, ironic for especially being the case in the more crowded scenes. Even more curious, the Tiny Titan is often fairly prominent, as in this piece where he pretty much has a starring role. The largest and most prominent figure is Wonder Woman, who is staring intently at Ray Palmer's ass, directly below the logo. A scale Atom rarely gets better visibility than that, and that scale meant that he was the only other featured hero shown in his entirety. I'll take a small but dynamic Atom over half a Flash, three-quarters of an Aquaman, or a Martian Manhunter bust! Even the World's Finest due are partial amputees...

Special thanks to Firestorm Fan for the notice!
Posted by Diabolu Frank at 12:00 AM