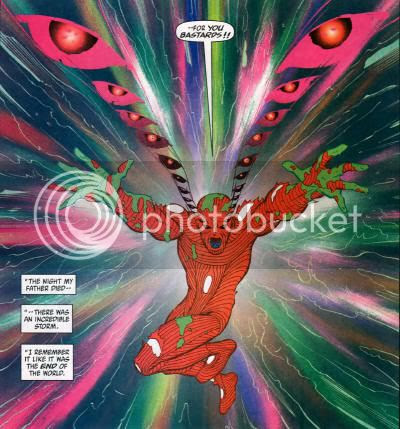 Kaaterskill Falls, New York. Herdsman was near a forest waterfall. Sensing a presence, he attacked, and was easily rebuffed. The cigarette smoking woman wished for his report following recovery from injuries sustained during his first battle with Tim Zanetti. "There is immense power in that one. He is... different."

"Of course he is. I have set things in motion, old one. Now we will see how our warrior deals with his next test... when his son comes calling"

Limpopo Province, South Africa. Tate McClellan had dreamt of his father again, and thought about it as he hiked into the night. In a barren recess, Tate found an extremely gnarled tree. In the distance, he saw a light.

Tim Zanetti could sense the evil in this place, where the Herdsman breached our plane. Visions filled his mind, and he erupted with energy. Calming down, Tim had a talk with Dr. Paul Chambers. Tim felt like a freak, worried over the fate of his family, and inadvertently turned a desk into a distorted mess with his touch. "...The Herdsman... I'm afraid I'm... losing myself. I still remember how I felt when I fought him-- and the power that came with it-- I enjoyed-- wanting-- to kill." Paul touched Tim on the shoulder in a gesture of comfort, and I suppose trust, since the containment suit had so far been less than reliable. 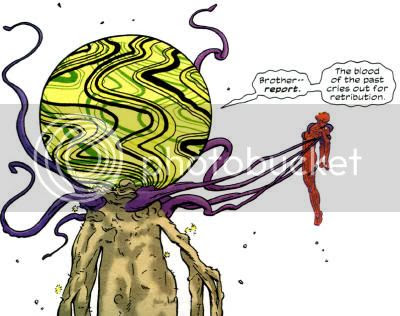 Government agents reviewed evidence of the Herdsman's presence in Metropolis and Kansas, specifically grotesque sheathes of human flesh seemingly emptied of any interior structure. The Herdsman's collateral damage signature at Project: Otherside matched archival footage from the 1980s, including the original breach event at Baikal. No "Rifter" activity had been expected so soon, and even though there was some relief from Major Zanetti's performance against the Herdsman, "imagine an entire invasion of these creatures..." General MacClellan warned, "We can't keep this a secret much longer. They're leaving calling cards, like Limpopo. And believe me, if we heard about this event... others will have, as well."

Tim had stripped out of his whites and hovered at rest in a corner of his room. A voice ordered him to come, and though a soldier tried to bar his way, it didn't take much of a threat to get the poor kid to move aside. In the distance, an orb of green swirling energy with purple tentacles underneath ripped itself out of the earth. An piercing squeal had everyone present covering their ears in pain, while the Beacon questioned Zanetti. "You are late, brother. Report... The blood of the past cries out for retribution... You are late. Penalties will be applied."

The Beacon had the same stench as the Herdsman, and Tim nearly drowned in its influence, until the last gasp of his humanity saw him renew his struggle. Energy blasted Tim hundreds of yards to a hard landing, where he was approached by a concerned Tate. Tim blasted the young man to keep him from making deadly contact with his physical form, and was shocked to recognize his little man Tate as an adult. 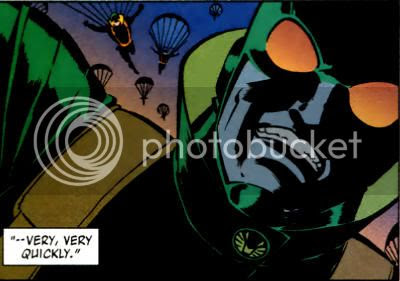 Shock was met be shock as the camp was assaulted by fighter jets. Agents of the international terrorist cult Kobra parachuted from above, and tried to tow the beacon with grappling hooks. Tim hesitated to use his powers, instead picking up conventional firearms. However, Kobra's advanced technology had disabled the military's equipment, allowing for wholesale slaughter. One Kobra trooper recognized Tate as a civilian, but "Kobra allows for no eyewitnesses." The threat to his son's life saw Tim reduce the Kobra forces to ash. The Beacon intended to end all other human life in the immediate area to insure their unclean hands would never touch its self, but Tim tore into it with his own mitts. Tim saved everyone Kobra hadn't already killed, and destroyed the Beacon, but "I feel so... lost?" Tim denied knowing Tate when asked if they had met before. Instead, he walked away from the damage he'd wrought.

"Something has... changed. Something intangible is... gone. Like a piece of me just died. But what it is-- or was-- I can't say. And for reasons I do not understand... I start to cry."

A Kobra trooper reported back to Talia, daughter of Ra's al Ghul, and current leader of the cult. In typical Bond villain fashion, she killed the man for informing her of the failure to acquire the Beacon. Perhaps she intended to save face with the men with whom she was having a meeting, heavily obscured fellow members of the new Secret Society, most likely Lex Luthor, Black Adam and Deathstroke the Terminator. 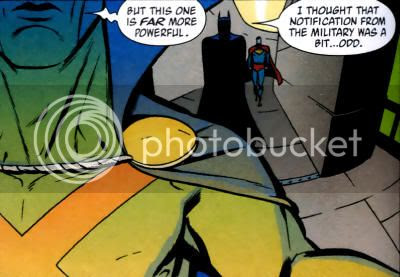 From the Watchtower on the moon, the Martian Manhunter observed, "Amazing. This is the third unidentifiable energy signature emerging out of South Africa in two days. The Pentagon told us the initial two were from an operation they were conducting. But this one is far more powerful." Batman had thought that notification was odd. "I agree. There were indications here of time/space distortion that current military technologies could not hope to achieve." Batman thought this warranted further investigation, and Superman agreed.

"The Beacon" was by Bob Harras, Marcos Martin and Alvaro Lopez. There was not a single straight-on shot of the JLAers during that final sequence, recalling how the super-heroes were treated in an old Alan Moore issue of Swamp Thing. In fact, Harras and Martin seem to be doing their level best to make this series something more sophisticated and ambitious than the norm. They don't quite pull it off, landing more in the vicinity of overly self-serious, but it's still a good looking book that reads well. Seriously though, you can only get so much mileage out of DC's answer to Hydra, no matter how nice the redesign.