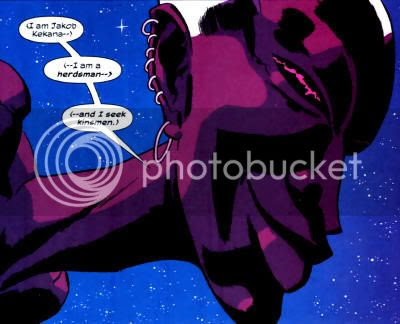 Dr. Paul Chambers was overseeing the application of Tim Zanetti's red polymer outer skin to dampen his powers, since his uncovered body emitted a dimensional distortion field that turned people into a puddle of mess on contact. Unfortunately, Zanetti had been in a near psychotic rage since emerging from his coma. Paul was working with Dr. Campbell Chambers, his wife, who suited up to pay Tim a visit. Before they parted company, Campbell chided Paul for his taste in laughable conspiracy books by Tobias Underwood. Campbell tried to explain to Zanetti what he had become, as best as modern science could tell, as well as revealing that he was the sole survivor of Project Otherside. Tim was distracted by a pounding in his head, wondering where his family was, and the sense that "Something... is coming!"

General McClellan discussed Project: Otherside with his superiors, and the importance of Major Zanetti in dealing with further projected breaches. They thought the next wouldn't be until 2020.

The Limpopo Province, Africa. Jacob Kekana herded sheep, and fingered a medallion on his neck while singing a love song. Suddenly, a dimensional portal opened up, rending his flesh and dragging him from off the earthly plane. Hours later, something like Kekana emerged, but it was not human. The figure had purple skin, glowing eyes, and was elongated in a fashion most unnerving. In a native tongue, he said "I am Jakob Kekana-- I am a Herdsman-- and I seek kinship." He continued singing his song as he walked through a wormhole. 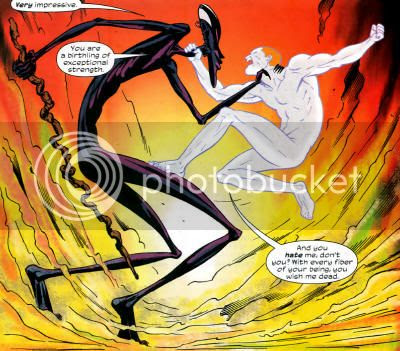 In Nairobi, Kenya, the adult Tate McClellan was sitting on a bar patio, talking candidly with a mysterious brown-haired smoking woman. They discussed his dreams about the death of the father he couldn't remember in a freak storm, and how a recent one ended with him telling his dad it was time to come home. Tate's stepfather Mac came up, and the journeys Tate was taking to exotic locales to develop his writing. Tate hoped the girl would forgive his uncommon babbling, and listened when she suggested a trip to Limpopo Province. "I make people comfortable. It's my gift."

The Herdsman arrived in Metropolis, and killed a bum for his jacket. "I seek the young kinsman... You are not who I seek. You are a weak, weak thing. But at times, small sacrifices are more than enough." A redneck couple passed him on a rural road some time later, startled by his over seven foot tall stature. Always with a smile, "Jakob Kekana" murdered them and overturned their car. Finally, the Herdsman found his kin, and passed through comic panel borders and desert floor into a secret military base. A few lives later, he had found Tim Zanetti. "This is-- wonderful, brother! Now comes the testing."

Zanetti leapt at Kekana. "You attack? Good. Good! In the beginning, the bloodheat is all we feel. I remember it well. Your mind is clouded by thoughts not your own-- but that will change, young one. That will change-- if you deserve life. For we cannot-- suffer-- a weak kinsman..." Kekana manhandled Zanetti for a bit, until his rage burned through his polymer shielding. The pair then burned a hole out of the complex and continued the fight in the desert. Kekana was impressed by the birthling's exceptional strength, and turned to ash once he'd decided Zanetti had passed his first test, again singing his song with a perpetual grin. "That was-- so easy!? I-- enjoyed-- killing him. Dear God-- it felt... right. What is happening to me? What was that thing? What the hell is going on?" Tim used to be such a nice, even-tempered guy...

"Herdsman" was by Bob Harras, Marcos Martin and Alvaro Lopez. The pace picks up a little tiny bit, but most of the ground not covered by Jakob Kekana was familiar enough to Captain Atom fans to be redundant. The Herdsman is one creepy-cool dude though, and I look forward to seeing more of him.