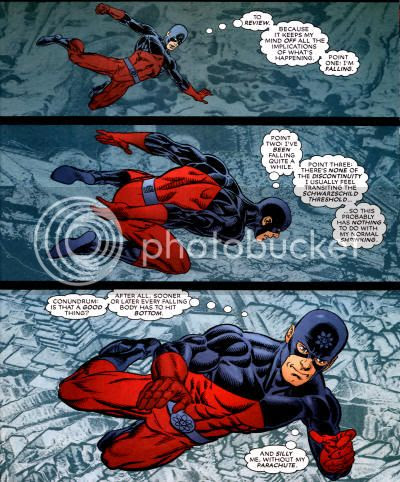 The Tiny Titan fell through an unknown expanse of space within the telling stone of JLA shaman Manitou Raven...

"To review. Because it keeps my mind off all the implications of what's happening. Point one: I'm falling. Point two: I've been falling for quite a while. Point three: there's none of the discontinuity I usually feel transiting the Schwarzschild threshold... so this probably has nothing to do with my normal shrinking. Conundrum: is that a good thing? After all, sooner or later every falling body has to hit bottom. And silly me, without my parachute."

Finally, the Atom landing gracelessly but unharmed on a crystalline surface. In the distance was a tower of similar material. From out of hidden tunnels in the ground emerged bipedal, somewhat insectoid green brutes. The Mighty Mite evaded them for a time, but was eventually encircled and beaten down.

"The Enemy Within," part two of "The Tenth Circle," was by John Byrne with Chris Claremont and Jerry Ordway. For some reason, Ray Palmer's dialogue bounced between the usual stoic scientist and cringe-inducing inappropriate informality. I suppose this was meant as a throwback to the Bronze Age, but it read more like an introduction to schizophrenia.

I might have to actually go find/get "The Tenth Circle" storyline after all; yes I know it contains a horrible and unnecessary reboot of the DP, but it does contain the rarity of being written by Chris Claremont and John Byrne. Looks good so far!

Also, I love the new blog logo you designed; it really fits the blog.

The story starts out okay, but ends up crushed by the weight of its own contrivance. Also be warned that the story is not complete, running into the first two issues of the spin-off series.

I'm thinking I had this banner in mothballs too long, since it's come around to being "new" again. Glad you dig it, though. ;)