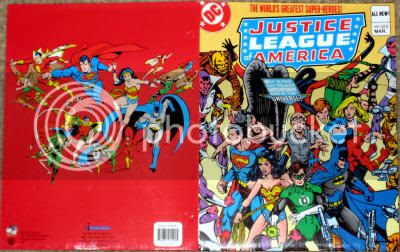 Do not hold your breath for any solo Tiny Titan school supplies, especially now that Batman: The Brave and the Bold has been canceled, but Ray Palmer's decades-long association with the JLA does have its benefits. As with the 2010 Justice League of America #217 Twin Pocket Folder and Notebook Style #3009DC, the Mighty Mite earns his name as a small detail amongst the intricacy of a classic George Pérez composition. That's him riding Batman's shoulder on 1983's Justice League of America #212

The Atom must have gotten comfy there, because now that Innovative Designs are putting art inside their folders, we can see he's still posing on the Dark Knight's right shoulder. 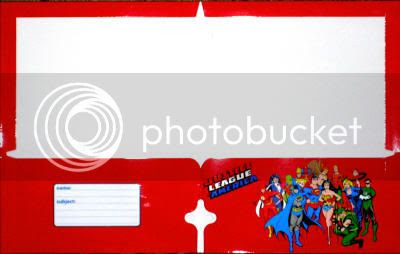 That piece of stock art by José Luis García-López and Dick Giordano has been making the rounds since the early '80s, but this is the first item I've owned where the piece was rendered in such vibrant colors on high quality stock. Not only did I need to scan it on its own, but I actually blew it up for your viewing pleasure. Just click the pic to enlarge. 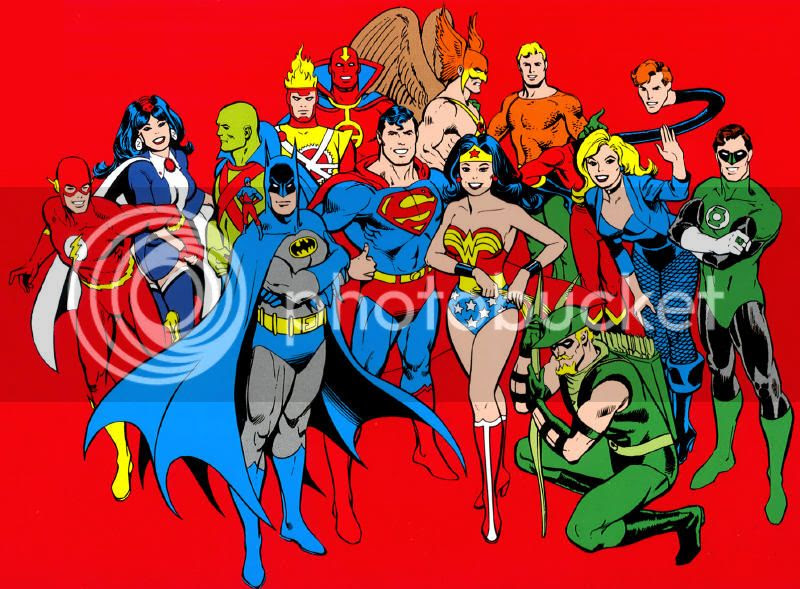 I love how the Flash is holding Zatanna's hand and running to join the group. Barry and Zee almost had a thing back then, which was one of the shames of bringing the married Allens back to replace the married with children Wests. The Martian Manhunter, Firestorm, Red Tornado, Hawkman, Aquaman, Elongated Man, Black Canary, Green Lantern Hal Jordan, Green Arrow, Wonder Woman, and Superman stand their ground from there, clockwise. 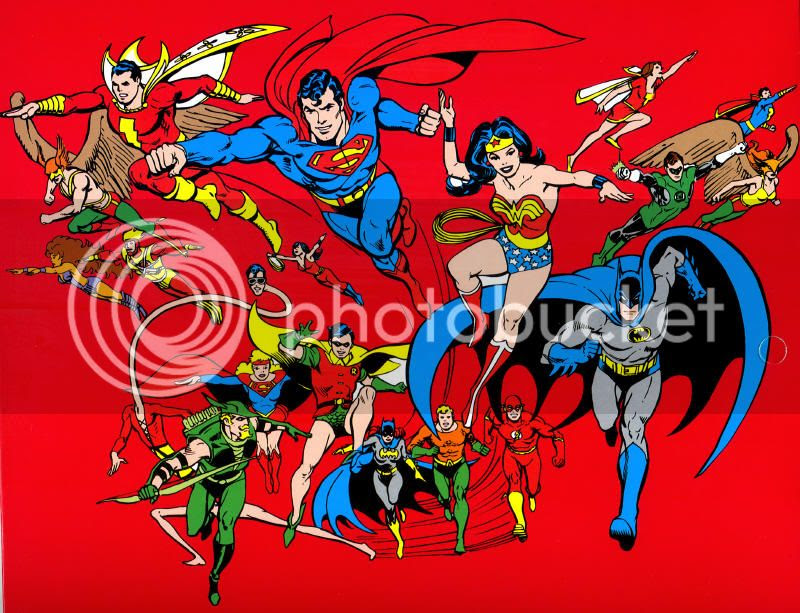 I also decided to offer a nice big scan of the back cover art, which is also stock, but much less common. J'Onn, Ray, Ralph, Zee, Dinah and Reddy exited to make way for Starfire, Captain Marvel, Wonder Girl (Donna Troy,) Plastic Man, Supergirl, Batgirl Hawkgirl, Mary Marvel and Captain Marvel Junior. It's a shame they neglected to do the color fills behind Robin the Boy Wonder or under Wonder Woman's right elbow and thigh. Still, pretty groovy, and far better than that same old "DC 75" logo from the 2010 folders.

"I love how the Flash is holding Zatanna's hand and running to join the group." I wouldn't have noticed that if you hadn't said that. That is awfully cute.

I love the covers-as-folders idea, especially using older comics. So kids can get a nice little comics history lesson.

Gorgeous folder there! Color me jealous!

I'm sure you thought of this, but I gotta assume Flash was just stock art and dropped in the group shot, thus the holding of hands was merely coincidence of the art matching up. However, I'd rather it represent their secret love!

This art has been floating around on merchandise for years, but I've never seen it up close before this. As far as I know, it's all of one piece by Jose Luis Garcia-Lopez and Dick Giordano, not a collection of individual stock art (a.k.a. "the usual.")