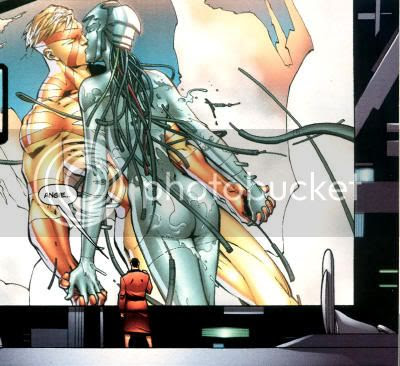 Mr. Majestic showed up at The Authority's ship, and was assured Jack Hawksmoor already had a plan in motion.

Captain Atom finally let loose of some power when The Engineer talked him into killing time dismantling a "bargain-basement Stalin" and his regime. "Back home, it was all about maintaining the status quo. Keeping the ship on course. But what if the status quo needs changing? What if the ship needs to be sunk? I'm not saying I agree with her methods... but they do get results."

Afterward, the Engineer was allowed to send her nanites into Captain Atom and fish out the problem. The Doctor checked to make sure everything was still intact a year in advance, and gave Captain Atom the all clear. Atom started making the sexy time with the Engineer, claiming that he had never had such an intimate relationship with a woman, even if he didn't like her resentful attitude toward saving humans.

Jeremy Stone had continued his studies, and explained to Grifter what a disaster it would be in Captain Atom ever came into close contact with Nikola Hanssen.

Separately visiting the site of the destroyed apartment where the story sort of began, Captain Atom touched Nikola Hanssen, who turned into Void while he collapsed.

"Sometimes, When We Touch..." allowed Will Pfeifer, Giuseppe Camuncoli, Sandra Hope & Trevor Scott to take up maybe five minutes of my time.