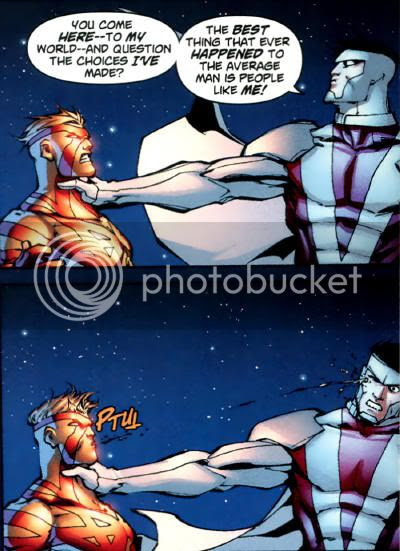 Captain Atom just showed up floating in front of the White House in the super-hero fearing Wildstorm Universe, so of course the Join Chiefs of Staff decided to nuke the area, as "It's the only chance to save America." Captain Atom absorbed the blast, then teleported into the Oval Office to talk with the president. Guards fired conventional weapons at his deflective skin, because they're stupid. Atom started explaining his situation, ending with "I'm a military man, sir. That means I respect authority." Yeah, that's readily evident in his actions, right? "Authority, eh? Funny you should put it that way." The President explained that he was only human, and in a post-human world, "we answer to a higher authority."

Grifter kept trying to explain to Nikola Hanssen that she had all these Void powers from her splinter, but she was kind of in denial.

Mr. Majestic showed up to talk at Captain Atom some more, but the latter was all pissed off by how jacked-up Wildstorm comics were. Captain Atom actually spit in Majestic's face like a little bitch, and gotten thrown through the Washington Monument. Nanobots would tidy up that mess later.

The artist referenced Edward Hopper's Nighthawks, because that was clever thirty years ago in a Howard Chaykin comic or something. Grifter called the WildCats to meet at the monument.

Mr. Majestic explained that Captain Atom wouldn't go explodey if he got deadened first, but Atom sought a second opinion, and Majestic was cool with that. Captain Atom then directly accessed the Pentagon's computers through his powers, and ran all sorts of equations that all ended him him going all explodey. All mopey, Captain Atom returned to the restored Washington Monument, so the WildCats could get snarky with him.

"Power Struggle" was perpetrated by Will Pfeifer, Giuseppe Camuncoli and Sandra Hope.

Posted by Diabolu Frank at 8:07 AM