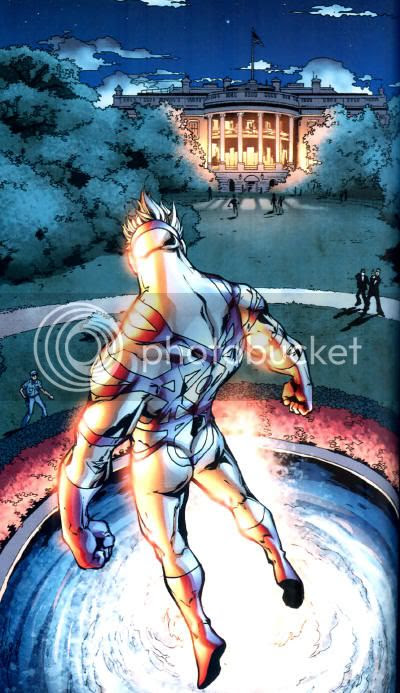 Grifter met with his WildCats teammate Jeremy Stone to use his computer to detect not one Void energy signature, but too. Woooooo.

Captain Atom determined that that he wasn't in Kansas anymore, in part because this Earth lacked the cities of Metropolis, Gotham, Opal, Keystone and Sub Diego. Yes, Sub Diego, because the writer of this mini-series created Sub Diego during his brief Aquaman run, and not entire nations like Bialya, Qurac, and so forth. Nathaniel Adam then assumed his human form to learn once again that nobody on this Earth ever heard of super-heroes from his Earth, and that everyone's afraid of super-people here, and that he's too dense to have gotten that point last issue, and that it'll be made again in future issues because of that. Captain Atom then directly tapped into every computer on Earth through a pay phone, which I don't recall as being one of his powers, but it's done all matter of fact-like.

Grifter brought the WildCats back together to investigate the Voids and to be snarky to one another for reasons DC readers wouldn't understand, because nobody got a proper introduction.

Captain Atom and Mr. Majestic fought a little bit more, then Majestic gave a brief half-assed explanation of the Kherubim-Daemonite war that formed the basis for much of Wildstorm's continuity. Then Majestic ran some tests and determined that Captain Atom was going to blow up and destroy the entire Wildstorm Universe, so I guess its origins didn't really matter all that much. Further, Atom couldn't be gotten rid of by any known means.

Grifter approached that EMT from last issue, Nikola Hanssen, and started talking to her about Void type stuff.

Captain Atom, predicted destroyer of all Wildstorm reality, decided he should turn to someone with real power... the President of the United States. In the Wildstorm Universe. Because if he can't beat Superman, maybe he can out-dumb Hal Jordan...

"Brave New World" was inflicted by Will Pfeifer, Giuseppe Camuncoli and Sandra Hope.