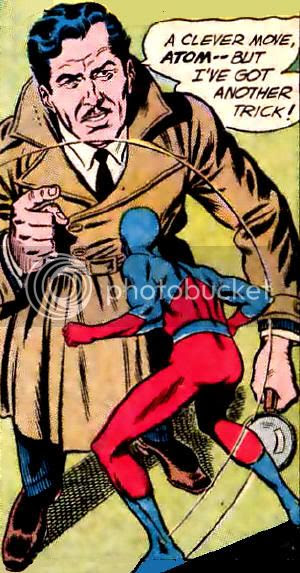 History:
Greg Phillips knew his newspaper work would pay off big someday, as it provided him access to the right people, and their valuables. One such person was the great brain scientist Jason Saunders, who had developed a pill that would increase the telekinetic power of mind over matter in a person's brain. Before Saunders could announce his discovery to the medical society, he was killed in an automobile accident, leaving only Phillips aware of the pill's existence. Phillips memorized, then burned Saunders notes before turning the pills to his advantage.

Phillips began a crime spree to experiment with his new powers, stealing a wedding ring, the world famous Elgin Cameo, and a platinum chess set. Phillips seemed to target events where Jim Barnes, an acquaintance of Jean Loring, would be in attendance. This was presumably to throw off suspicion of Phillips' own presence at the robberies, but also drew the attention of Loring's boyfriend, Ray Palmer. As the shrinking hero the Atom, Palmer uncovered Phillips' wrongdoing, and survived an attempt on his life in bringing Phillips to justice. Phillips was captured during an attempted heist at the Ivy Museum, and has made no further appearances.

Powers:
Saunders' pills enabled Phillips to utilize the power of his mind to remotely control objects. Phillips could levitate objects so swiftly the naked eye couldn't detect movement, causing them to seemingly disappear into thin air. Phillips was only ever shown to lift relatively lightweight objects for short periods of time, so the full extent of his abilities are presumed to be modest.

Weaknesses:
Although Phillips could move objects with great speed, his control over animated figures wasn't complete, as evidenced by the Atom's ability to resist Phillips' telekinesis. Also, Phillips required an undetermined amount of time to focus on an object to assert control, as he could be attacked by projectiles.

Quote: "Up you go, Atom! You're so tiny I don't have any trouble levitating you!"

Created by Gardner Fox & Gil Kane
Posted by Diabolu Frank at 10:22 AM