Gardner Fox, Gil Kane & Murphy Anderson-- kicking all kinds of tail in five stories over three try-out issues of Showcase! An eponymous ongoing series was the only natural progression, and for the launch things had to open big!

D-Day is the historical date of the World War II invasion of France by the allies.
V-J Day signifies the victorious end of the war with Japan.
Now comes P (for Plant) Day-- the invasion-date of the United States by the plant world! Commanding the army of plants is Jason Woodrue-- and waging a desperate one-man battle against this fantastic foe is the World's Smallest super-hero-- the Atom!

MASTER OF THE PLANT WORLD!

Why, that's a pretty impressive shift in scale, right? From something of a detective series to thwarting the global menace... of plants? This is a Justice League of America caliber threat-- like Fox wrote in his utterly inane and terribly overrated work on that awful title?

What I'm saying is, that surprising streak of quality scripts? That's over with now.

Henry Chalmers is lighting a cigarette after dark on the sidewalk near Ivy Town Bank. Chalmers spies a mysterious figure drop a seed outside the financial institution, only to see it instantaneously sprout into an acid spitting flower. The pungent petals burned a hole right through the bank wall, then crept their way across the floor to give the vault a similar treatment. Chalmers followed, only to find a mystical dryad (looking like a recolored Poison Ivy, with green skin and lavender hair/costume,) making off with loot. The child-sized wood spirit flew off, leaving Chalmers to vainly explain what he saw to the police, only to end up in handcuffs.

That last bit may sound familiar. Substitute a dryad for a genie, and its the same basic set-up as the first costumed Atom story, "Battle of the Tiny Titans!" Chalmers of course enlists lady lawyer Jean Loring for his defense, Ray Palmer's intent to propose to Jean yet again is rebuffed (before they even reach his romantic getaway spot,) and the dejected young scientist helps her case as the Atom. This portion is a by-the-numbers introduction for new readers, including an origin recap, an internal monologue from Jean about how she won't marry until she's an established lawyer of note, and another from Ray expressing his willingness to undermine her achievements with his super-heroic contributions if that's what it takes to get to the alter.

At least this time, Jean puts forth an actual effort toward managing the case on her own. Loring finds evidence of the potential existence of the super-plants Chalmers described, and manages to link them to a robbery from the greenhouse of retired Ivy University professor Walter Dudley. In her purple suit, pillbox hat and white gloves, Loring stakes out the greenhouse, only to be knocked out by gas emitted from some orchids. A couple of mite-sized "floral spirits" then made off with more flowers, not realizing a Tiny Titan has stowed away on one of their stems.

The sprites returned to their new master, Jason Woodrue, in his starched white old school medical uniform. Looking as he did, it never occurred to me that this wasn't "Doctor" Woodrue or "Professor" Woodrue, and I'd always assumed he was a mad scientist who later transformed himself into "The Floronic Man." That would be a false assumption on my part, as we'll soon learn.

The Atom lunged at Woodrue, but was bombarded by seed projectiles and swallowed by a [sic] "Venus's flytrap." Just as in The "Disappearing Act" Robberies!, the overconfident villain left our hero for dead in a desktop trap, but the Mighty Mite broke free with his size controls. The Atom then answered the cries of Maya, Queen of the Flower Spirits, who was being held captive by Woodrue in order to force her to give him control of her dryads. My, by the way, had blond hair and wore a red one-piece, to differentiate her from her minions. 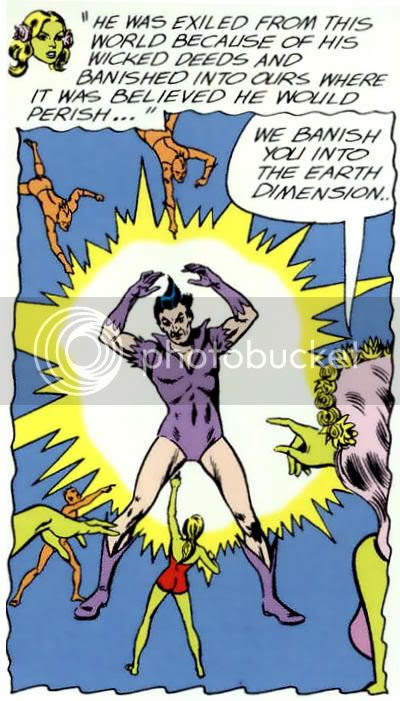 Maya explained, "Woodrue is not a true Earth-Man! He comes from a dimensional world close to our own which is inhabited by wood nymphs, dryads, nereids, air sprites and flower-spirits! He was exiled from this world because of his wicked deeds and banished into ours where it was believed he would perish... He retained all knowledge of his other world, however, when he arrived here-- which gave him the power to capture me and compel my obedience." Although Woodrue could control Earth's plants on his own, he found it much easier through Maya, speeding his path toward global conquest through flora.

Maya took an enlightened Atom by the and flew him back to Prof. Walter Dudley's greenhouse. "I sure am getting a lot of free rides tonight!" There, they met with the recently revived Jean Loring, he didn't know enough to be jealous of Atom's "little girl friend." She was too busy being self-involved and demanding, anyway. "I'll win my case if you can catch this Jason Woodrue for me! That shouldn't be too hard, Atom..." Yeah? Why don't you do it then? Let's pit your Jackie O wannabe ass against the Plant Master, huh? Oh-- that's what I thought. Ray's considerable charms may have been lost on Jean, but Maya was all set to hang with the Mighty Mite until Woodrue next revealed himself. "I don't mind waiting-- with you here, Atom!" Awww, yeah. Don't try to tell me Ray didn't take out some frustration with Princess Laethwen after Jean (presumably) kept him chaste that night.

P-Day (what a segue) launched at 9 o'clock EST, with giant plants scaling skyscrapers, melting jets, and assaulting our armed forces. With a control box strapped to his chest, Jason Woodrue commanded "People of America-- surrender! I give you five minutes to yield to me-- otherwise my plant army and I will march on your capitol city and demolish it!" Yes, tremble before his... "deadly plantoids?" All that mess, and we still can't take plantoids seriously, can we? Anyway, Ray dials up Washington D.C., while Maya finally remembers to countermand Woodrue's ordering of her flower-spirits and redirect them to stymie his progress. 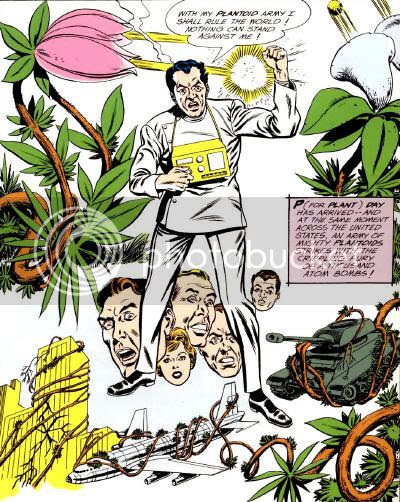 In the nation's capitol, the Atom redirects organic cannonballs away from fighter planes and back toward the plants that fired them, all done with crackerjack timing and dazzling skill. Unfortunately, Ray's only human, and the same gasses that overcame our troops knocked him out. Good thing Maya and her carbon dioxide breathing flower-spirits arrived to carry the Atom to fresh air, and eventually to Jason Woodrue. However, Woodrue was aware of the wrenches in his works, and nearly downed the Mighty Mite in the grabbing tentacles of a water-plant. Woodrue could again command Maya at this range, and ordered her to sleep for a decade. Jason then fired a seed capable of destroying a city with his slingshot-- which was spiked back at him by the Atom, who'd extricated himself and stolen Woodrue's control device. Fearing for his life, Woodrue agreed to revive Maya in exchange from salvation against the all destroying... "puffs?" Sigh.

Once again, the Atom delivered unto Jean Loring and acquittal on a silver platter, although by this point who even remembered Henry Chalmers' plight? For a supposedly science oriented strip, this thing dove deep into the supernatural and tethered itself to one illogical leap after another. Coupled with the formulaic opening chapter and all the plant nonsense thereafter, it was a relief to see Jean congratulate Atom and be done with it. In a cute twist, the Atom had to dive into the phone Jean was using to call her boyfriend Ray Palmer to tell him about the adventure, so he could answer at the other end. "I know all about it, but I'll have to hear it over again! Oh, well-- that's the penalty I must pay for having two identities!"
Posted by Diabolu Frank at 10:12 PM