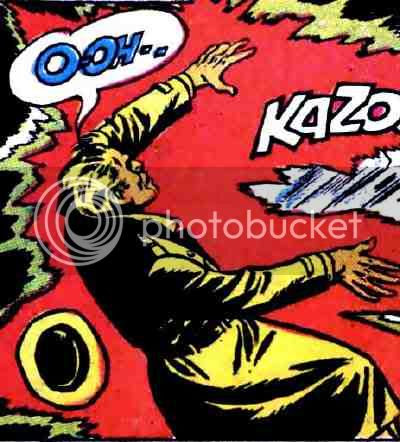 John Jones decided that swift action must be taken, and raced into the Heywood plant. Left and right were Lizard-Men and synthetic humans, each posing a deadly threat. No longer possessed of the quality of weaponry they once wielded, the Lizard-Men still had an easy enough time culling flame-throwing contraptions out of the laboratories with the compound. Meanwhile, the Synthetic Men were impervious to injury, and were super humanly strong. An explosion here, a powerful blow there, and John Jones found himself crumbling before his combined opposition. The Lizard-Men could not control the synthetics, and would have quite a fight on their hands. The physicist Ray Palmer knew the inner working of the Synthetic Men, and could perhaps aid in their destruction. John Jones would never know how it turned out, as the life of the last living Martian was snuffed out like a candle...

Unhappy with your ending? Then start over!
Posted by Diabolu Frank at 12:06 AM