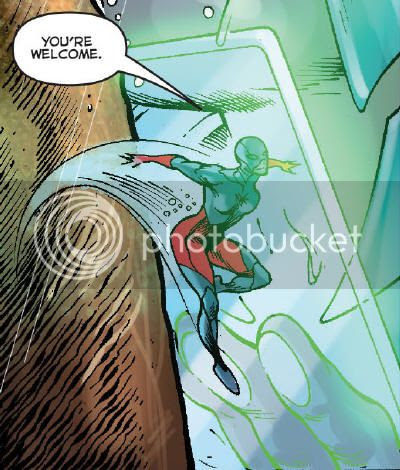 The reserve of heroes called by Cyborg to fight back the Atlanteans recovered from the explosion and continued on their mission. Perhaps late arrival Zatanna contributed to the renewed vigor of Vixen, Firestorm, Black Lightning, Black Canary, Hawkman, and Element Woman off-panel? The Nuclear Man continued to struggle with team dynamics, turning the floodwaters to steam that inadvertently blinded and choked the other heroes. One heroine who was more than holding her own was the new Atom, who quietly disarmed the explosive devices Ocean Master had intended to sink the city with. "You're welcome." The Justice League and Mera had arrived by that point, with Aquaman taking point. Ocean Master tried to drown everyone in a tsunami, but Mera held it back long enough for Zatanna to turn it to ice. Aquaman beat his brother until he abdicated the throne, which turned out to be Vulko's plan all along. Vulko surrender the scepter he had used to command the Trench, King Arthur ordered Atlantis to stand down, and Ocean Master was sent to Belle Reve Prison. Back at their satellite headquarters, Batman called the Justice League together for a new initiative. "We need to do what we haven't done before... We open our ranks." At A.R.G.U.S., Amanda Waller saw a similar need. "Atlantis's (sic) attack is the event we needed to push this operation through, Colonel Trevor... The world's skeptical. They want another team. They need one." A third mysterious meeting was taking place elsewhere, as a villain looked over snapshots of DC rogues. "The opportunity is now. It's time for recruitment... starting with the Scarecrow." "Throne of Atlantis, Chapter Five" was by Geoff Johns, Ivan Reis and Paul Pelletier with Joe Prado, Oclair Albert and Sean Parsons.
New 52's Day