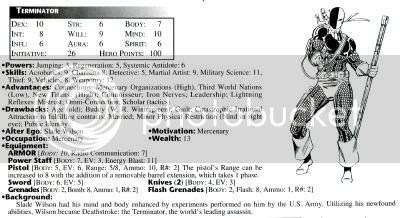 I was a Deathstroke the Terminator fan back in the day, collecting his entire (mostly rotten) series before growing bored with the character. However, killing Ryan Choi makes him an Atom foe, and Lord knows the Tiny Titan needs more of those (in quantity and quality.)

Slade Wilson has a Dexterity of 10, comparable to Batman & Bronze Tiger. His Strength of 6 is max human, 900-1,600 lbs. Body of 7 withstands small arms fire, like Aquaman and Hawkman. Intelligence of 8 seems a bit high, in Nightwing's realm, but I guess his enhanced brainpower accounts for that. Will of 9 allows one to override self-preservation to enter battle, like Sgt. Rock or Martian Manhunter. Mind of 10 indicates an individual with the self-discipline to undergo torture with grace, like Eclipso and Wonder Woman. Influence of 6 can hold the attention of a large audience, as Black Canary and other JSAers can. Aura of 6 rates about the same, along the lines of Aquaman or Queen Hippolyta. Spirit of 6 expresses a security of belief one is willing to die for, like Huntress and Booster Gold.

Deathstroke had some okay special powers, but his skills really level him up, like a 9 in acrobatics, 8 in charisma, a 9 Martial Artist, 11 in Military Science, 9 Thief, 8 Vehicles and 12 Weaponry. Under those terms, you can see how he could threaten metahumans seemingly outside his weight class.

Posted by Diabolu Frank at 2:19 PM