One offending b-word applied to Jean Loring, long pugnacious comments from a guy who seems to be in a perpetual state of conservative b-wordiness, an already overtaxed schedule, a blog renaming/design and two months later, I finally bridge the gap between my coverage of Sword of the Atom #1 and today's deuce. Damian already wrote up "Book Two: A Choice of Dooms" over two years ago at The Tiny Titan Blog, so I don't feel too bad about the wait, because the impatient could always get their fix via links.

The cliffhanger is resolved on the second page, as ravenous rats and heroes alike are gassed unconscious by the minions of Deraegis, the king's right hand toadie. Against the king's mild protests, his adviser advised that Ray and Taren should be nursed back to full health to compete in a public arena battle. Having an outsider and a rebel fight to the death gladiator style should help wash the royalty's hands of all that insurgency nonsense, right?

Ray Palmer spends the next several weeks on his own, naked save a loincloth, which he turns into a weird accessory when they return his Atom costume. Microscopic swamp ass dampener, I'd guess, though maybe weeks without his wife left him concerned wrestling in tights alone might prove embarrassing. He needn't have worried, since everyone in the arena instead focused on Taren, whose eyes had be gouged out prior to the fight. King Caellich hadn't given that particular order, but his daughter Laethwen was still horrified at her lover's mistreatment. The auditorium's audience shared her sentiment, and in fact launched into open revolt against Caellich. Pohrager, a trainer sympathetic to the rebels, led Atom and Taren to frog mounts. Upon one was Princess Laethwen, ready to join their escape in the confusion. Guards caught up with the group, so Pohrager stayed behind to hold back the force, and was inevitably captured. Caellich questioned Pohrager, and was dismayed he and his people were so willing to believe their king capable of evil.

Three pages of flashback to the previous issue commences, which seems unnecessary in a four issue mini-series, but whatever. At least it sets up Laethwen's own one page recollection of her people's entire history. You must remember, her people are small and yellow, so they just don't matter as much as the recent marital strife of one white Republican male. Oh hey, did I mention Ray was smart enough to figure out the basics of their language while in captivity? Just did. 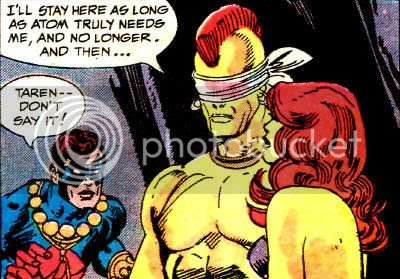 Little. Yellow. Different. The aliens had landed on Earth decades prior to establish a penal colony for its political undesirables, but left to their own devices, they forgot how to use their own devices. Left without support from home, the aliens slipped into a generational decline ending in barbarism. Clans left the city of Morlaidh, and those within saw a narrowing of their gene pool. I'm from the south, so I know what that's like. Caellich wished to stop the backslide by reuniting the tribes, and Deraegis figured the only way was through force, so there's been a lotta fightin'.

Poor blind Taren couldn't last a whole flashback on his own, and had to be saved by the Sword of the Atom. Literally, Ray threw a friggin' sword down a hungry lizard's throat. It was badass. "The mouth! Go for the tender flesh inside!" Ouch.

Back in Morlaidh, Deraegis blamed some guards for the blinding, then had Pohrager crucified in public view. Working both sides, Deraegis made a big show of bringing Pohrager some water. Deraegis blamed Caellich for this horror, and continued to sow the seeds of discontent while angling for his own elevation.

Our heroic trio met up with a rebel band in the jungle, and Ray learned Taren and Laethwen were planning to run away together before they were betrayed from within this camp by person unknown. Now, Taren wanted the Atom to lead his forces, since Ray was the only guy that could truly be trusted. Also, Taren wasn't about to be a burden to his peeps in such a dangerous environment, so he was planning his own death just as soon as Atom got everybody behind him. On top of the list of those not down was Voss, who got the Atom alone and did his level best to kill him a Tiny Titan.

Finally, back in Ivy Town, after a bodiless funeral and a few lonely weeks, Jean Loring called up Paul Hoben to make with the sexy time. She just needed someone to... talk to? Sure bitch... sure.
Posted by Diabolu Frank at 3:46 PM