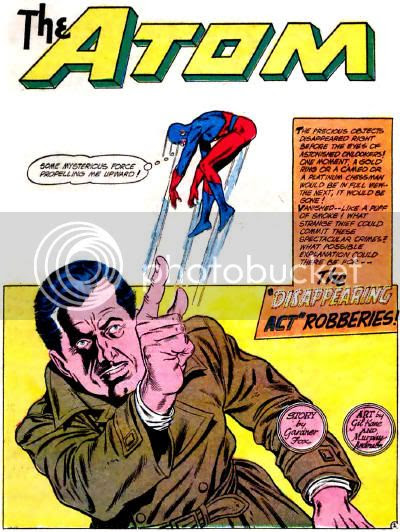 The second story from January-February 1962's Showcase #36 by Gardner Fox, Gil Kane and Murphy Anderson on the second Silver Age Sunday in a row! So, expect the entire blog to go cold for a couple weeks after this, given my pattern to date!

A harvest moon and a canoe for two inspires Ray Palmer's 61st proposal of marriage to Jean Loring.
"Yes... I will!"
"YES!? You mean you really will?"
"Will what, Ray? Oh, I was thinking about Alma Wilson and her fiancé-- and I've just decided I will take the case! Now-- what were you saying?"
"Oh, never mind! What's this about Alma's fiancé?"

Alma Wilson, who you'll remember from "the genie defense", actually listened to her boyfriend during their romantic getaways and accepted his proposal. Admittedly, she was just a bank teller who stated in open court she'd been robbed by a tiny man in a bikini, so she was probably less concerned about keeping her options open. Plus, Jim Barnes probably seemed like a catch, before that expensive wedding ring he was looking at "disappeared" in plain sight at the Ivy Jewel House. Then again, Jim was present with Mayor Andrews at the parade to crown a Cameo Queen, until the world famous Elgin Cameo "disappeared" in plain sight. Nobody could prove nothin', especially the involvement of a genie, but "a cloud of suspicion" fell upon Barnes that Jean Loring was going to dispel! There are no actual charges filed for a lawyer to defend in court, and Jean's neither a p.i. nor in p.r., but Jean the crazy person will "take the case" and do what she can... which is tell her boyfriend, who'll do all the actual work.

"Obviously, Jean is completely absorbed in her latest case! If I'm ever to get her to concentrate on me-- I'd better help her out again-- as the Atom!" After dropping off Jean and heading home, Ray reads an article in the Ivytown Herald about how Jim Barnes is the local chess king set to play a visiting European champion at Ivy Hall the next day. You'd think Jean would have mentioned that, especially the part about their playing with a platinum chess set on loan from a millionaire. But hey, she's on the case!

The Atom stows away inside a rook, and is levitated with the other chess pieces faster than could be seen with the naked eye during the match. Left on a high ledge overnight, the Atom and the pieces languish while a search of the building by authorities misses them. At "the first pink rays of dawn," the pieces are levitated out of the building and dropped swiftly into the back seat of a convertible, knocking the Atom out.

Now, in the flashback to the wedding ring scene, Ivytown Herald feature writer Greg Phillips was in the background. He even announced himself and his departure to police. At the Cameo Queen coronation, Greg Phillips was there. When the convertible driven by Greg Phillips drives away, you expect an explanation. Was Phillips working backwards from the chess match to frame Barnes for his main heist? Was Alma Wilson the love of Greg Phillips' life, so he just took every advantage against Barnes? Did Barnes touch Phillips in an overly familiar way at a bar? Nope-- Phillips was just testing out his new telekinetic powers, provided by the pills of a dead scientist, and Barnes kept showing up. Yuh-huh.

Back at his boarding house, Phillips spied the Atom stirring amidst his chess set, and gleefully tossed the Mighty Mite about the room with only the power of his mind. The Atom managed to find footing against a wall, and launched himself at Phillips. The Tiny Titan accidentally struck a magnifying glass in Phillips' hand though, and was knocked out. Phillips then dropped the Atom into the box with the chess, cracked open a poison gas pellet, and closed the lid on Ray. Using his growing powers, the Atom broke through the boxes' lid.

The Atom phoned himself to Ivy Museum, Phillips' next target, and briefly beat on the crooked reporter with a butter churn and other objects. Phillips' briefly fended off attack with his powers, but soon succumbed and was turned over to police. Jean arrived to shake the Atom's tiny hand in thanks. Ray still figures the faster he can take care of Jean's legal cases, the sooner he'll be married. Speaking of which, Alma and Jim tied the knot, after a comical incident involving a missing wedding ring (again.) Neither appeared in the book again...
Posted by Diabolu Frank at 3:24 AM